Nestled at the north slope of the Acropolis, Anafiotika is one of Athens’ most scenic neighborhoods. Lined with white-washed houses that resemble the design of the Cycladic architecture, this district looks nothing like the Greek capital.

Here is the story of Anafiotika and why it should definitely be on your to-do list.

The History of Anafiotika

The history of Anafiotika begins in the mid 19th century.

At the time the carpenters and workers of the Cyclades were considered to be the best builders in Greece and it is said that the King himself invited them to Athens to refurbish his palace.

Around 1840, builders from the Cycladic island of Anafi came to the Greek capital working on the palace of King Otto.

They started building their homes on the northern slope of the Acropolis and named their new neighborhood after their beloved island, Anafi. They followed the architectural style of their homes in the Cycladic islands.

White-washed houses with colorful doors and windows featuring flower-covered backyards. At the beginning of the 20th century, Greek refugees from Asia Minor also moved to the area.

However, in the 1950s, the largest part of the neighborhood was destroyed due to archaeological excavations in the area.

Today, Anafiotika is home to less than 50 houses but the island atmosphere still remains untouched.

Why You Should Visit Anafiotika

Adjacent to the touristic Plaka and only a stone’s throw away from the iconic Monastiraki neighborhood, Anafiotika is an area that can’t and shouldn’t be overlooked.

A stroll along the car-free cobblestoned alleys and picturesque passageways will take you away from the city’s noise and will give you a glimpse of the Cyclades’ scenery.

Even if visiting a Greek island wasn’t part of your original travel plans, a walk around Anafiotika will persuade you otherwise.

Aside from the charming little houses, this small village in the heart of the capital is also home to several Byzantine churches.

The Church of St. George of the Rock (Agios Giorgos tou Vrachou) at the southern side of the area, Agios Simeon church that houses the icon of Virgin Mary Kalamiotissa which is said to have miraculous powers are the most popular.

Last but not least, the area is like heaven for cat-lovers. There are numerous stray cats strolling around the area’s streets awaiting passersby to caress them or at least give them a treat.

Things to Do in Anafiotika

Anafiotika is the perfect place for a leisure walk in the area’s serene surroundings and for taking tons of instagrammable photos.

You’ll soon forget you’re in the heart of the busy metropolitan which you can only see from afar in panoramic views.

Make sure to walk all the way up to the top of the village and catch a glimpse of Athens from above. As mentioned there are also several Byzantine churches that are worth your while.

In a nearby distance from Anafiotika, you’ll also find the Kanellopoulos Museum and the Museum of Greek Folk Musical Instruments.

Now, in case you are a museum-lover, click this link and read about all the great and small museums in Athens, including the two we mentioned above.

How to Get to Anafiotika

Anafiotika is located on the northern slope of Acropolis and right above the popular neighborhood of Plaka.

Often GPS won’t function properly especially when you’re in the middle of the village’s narrow alleys.

If you’re getting here by metro take off at Monastiraki station and head south toward Ifestou street.

If you’re planning to combine your visit to Acropolis Hill with your tour in Anafiotika, walk along Theorias street until you reach Prytaneiou and then again Stratonos.

It can be quite tricky to spot Anafiotika but the route is equally impressive and it will reward you even you get slightly lost.

Where to Stay Near Anafiotika

The only accommodation you’ll find in the heart of Anafiotika is the Anafiotika Hideaway, a 95-square-meter apartment that was recently renovated.

It features one bedroom, one living room, and a bathroom.

Check availability of the Anafiotika Hideaway on Booking.com.

However, there are plenty of choices for all styles at a nearby distance. Keep in mind though that due to the area’s popularity, the accommodation close to Plaka and Anafiotika areas isn’t quite budget-friendly.

Four of them overlook the Acropolis while the rest have a view of the premises’ beautiful garden.

The rooms are also divided into four categories based on their design. All of them though are elegantly decorated.

See photos and read some reviews about 101 Adrianou Apartments on Booking.com.

Finally, Auntie’s Home is another excellent choice for those looking to stay in the heart of Athens’ most charming neighborhoods.

The bright and spacious apartment also features a cozy terrace where guests are invited to soak up the sun while rummaging the streets of Plaka. Anafiotika lies 300 meters from here while the Monastiraki square is less than a kilometer away.

Now, if you like to check some more options about which is the best area to stay in Athens, click the link below. 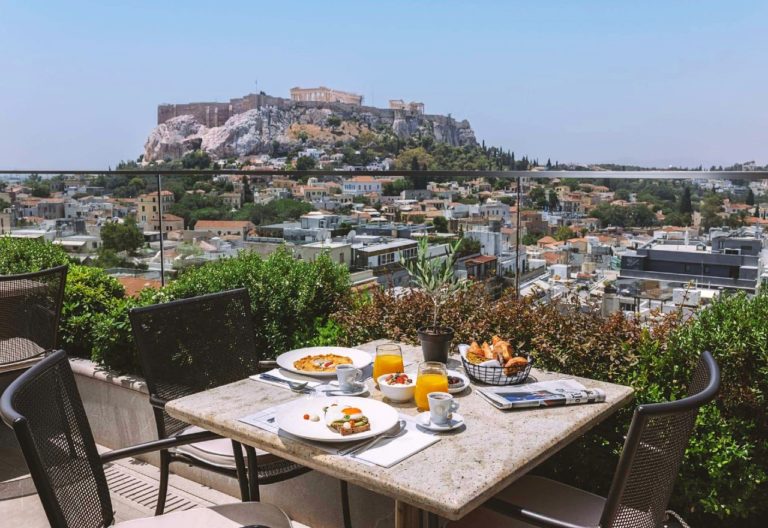 Where to Eat Near Anafiotika

Even though in the heart of Anafiotika you’ll only discover houses, in less than a 5-minute walk there are plenty of cafes and restaurants for a pitstop.

It features both an indoor and outdoor space ideal for lunch or dinner throughout the whole year.

Originally opened in 1882, the Old Tavern Of Stamatopoulos has been officially part of Athens’ gastronomy scene since 1965.

All dishes are based on Mediterranean cuisine and are made with fresh and local ingredients.

The traditional tavern features an indoor hall and an outdoor garden.

Housed in a three-level mansion at the feet of Acropolis Hill, Elaia offers a sophisticated atmosphere and outstanding views from its rooftop terrace.

The restaurant’s menu spans a wide range but all dishes are based on Greek cuisine.

If you like to check some more options for a restaurant in Athens, don’t miss to read our detailed article about some of the best restaurants in the capital of Greece. 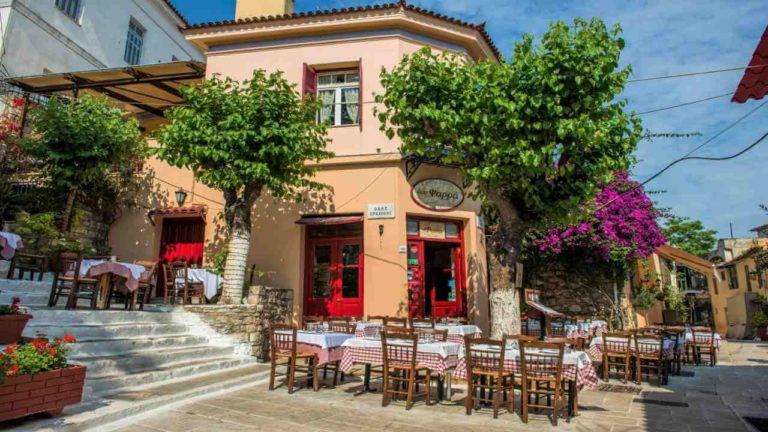 In this section, we’ll try to answer frequently asked questions regarding Anafiotika as well as give you some useful tips for your visit there.

Do you need to book in advance to visit Anafiotika?

No, Anafiotika is an open-air area accessible throughout the whole year. If however, you’re planning to book a guided tour, it is recommended to do it several weeks in advance.

Anafiotika is a car-free area. The best and only way to see Anafiotika is on foot. Biking isn’t recommended since the alleys are cobblestoned and in some parts, you’ll have to walk up the stairs.

Is it dangerous in Anafiotika?

No, this is a quiet safe area and it is usually crowded especially in the summer months.

When is the best time of the day to visit Anafiotika?

The best time to visit Anafiotika is in the morning or early in the evening. If you’re visiting Athens in the summertime make sure to avoid the hot hours of the day. 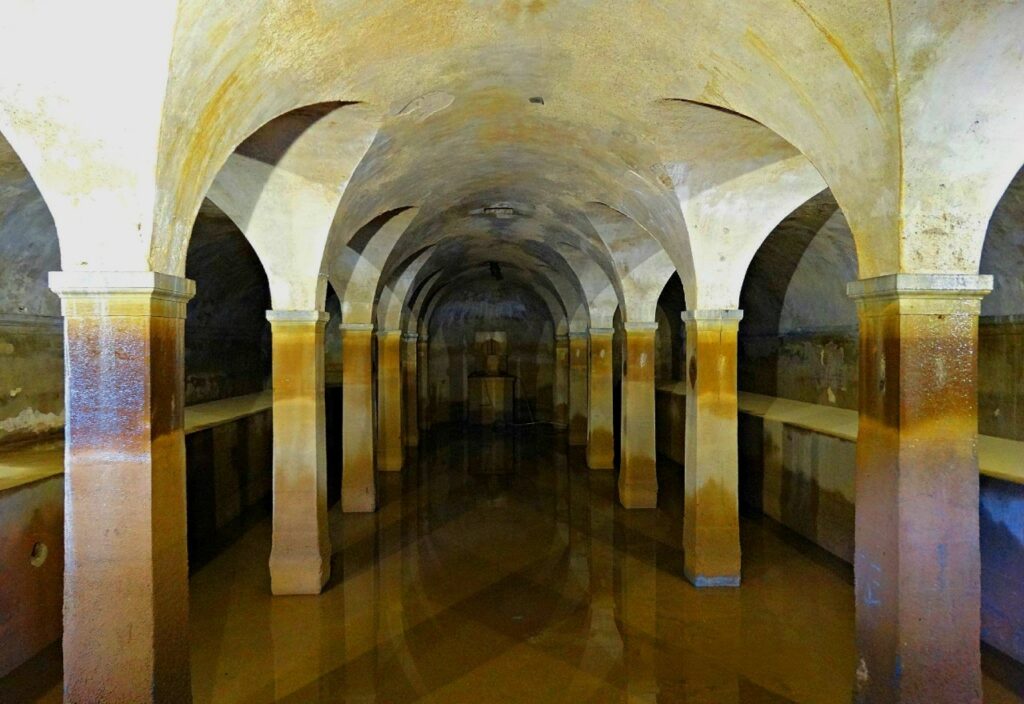 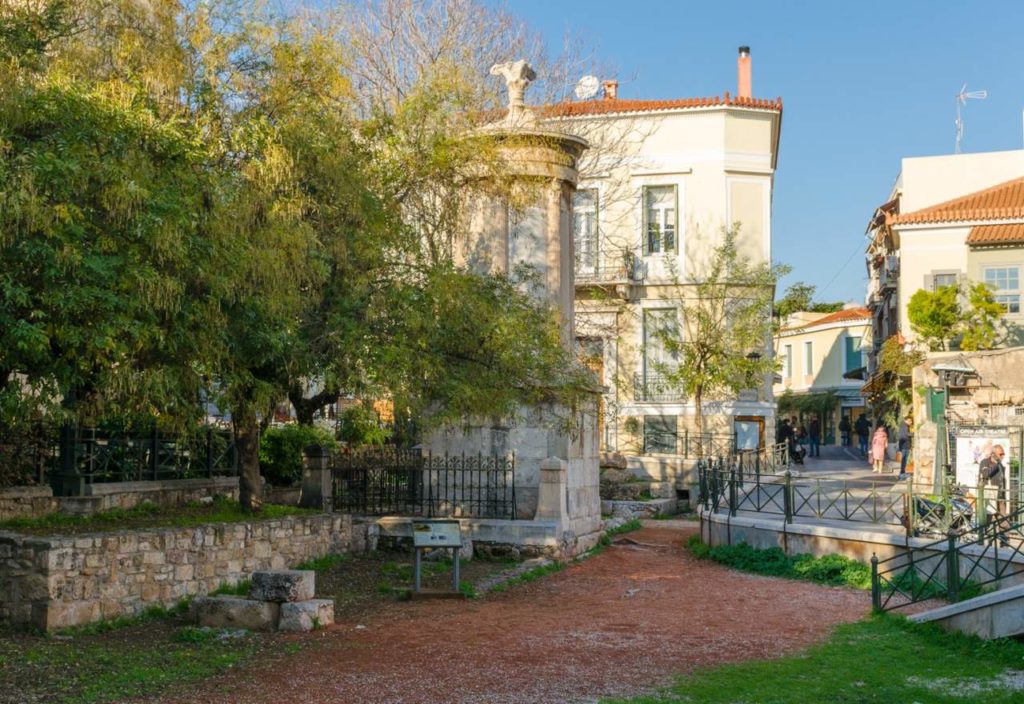 Tripodon Street: the Oldest Street in Athens and Europe 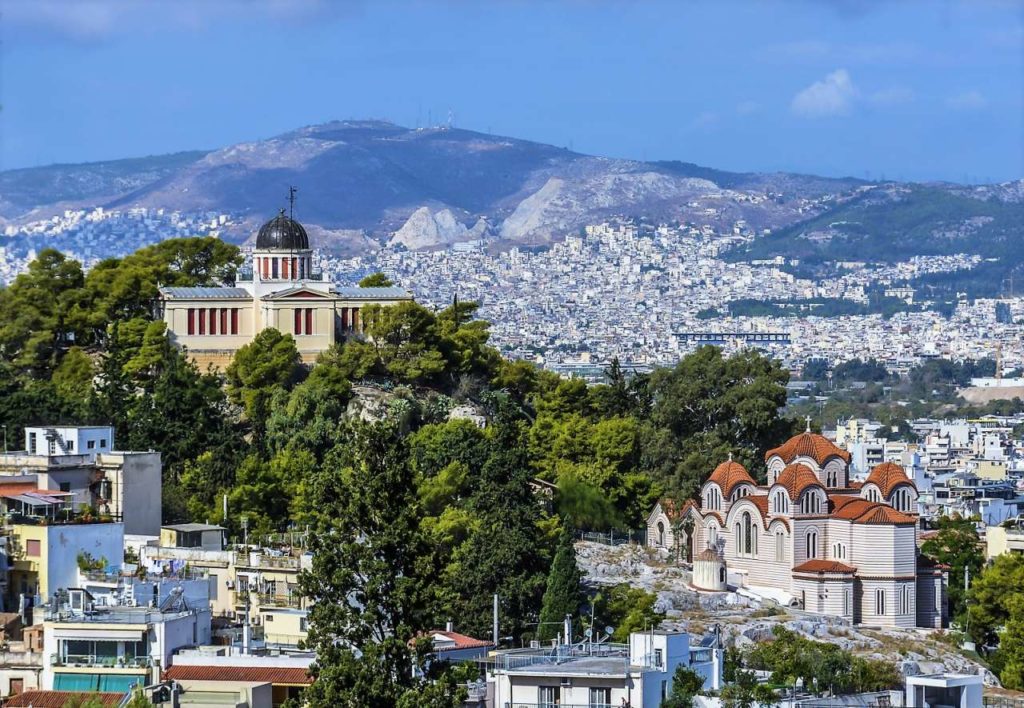