The Odeon of Herodes Atticus -or simply the “Herodeon” as it is more commonly known- is one of the most prominent ancient sites of Athens. And that says a lot, given that Athens brims with all kinds of archaeological attractions and architectural wonders of a glorious past.

Part of the open-air theater’s present fame stems from the fact that it’s nowadays used as a stage for concerts, plays, and all kinds of performances.

Its privileged location on the southwestern slope of the Acropolis hasn’t hurt its reputation either.

In this article, we’ll go through everything you need to know about the famous Odeon of Herodes Atticus: its long history, its location, how and when to visit it, and what you can expect to see there.

Why is the Odeon of Herodes Atticus a unique attraction?

The Odeon of Herodes Atticus is one of the oldest and most prestigious theatres in the world.

In the times of ancient Greece, the amphitheaters called Odeons were used for hosting plays and musical performances as well as gathering places for locals – and the “Herodeon” was the most famous among them.

But its fame extended way beyond the ancient era.

Since its reopening about 60 years ago, the Odeon of Herodes Atticus saw world-class artists walking its stage to entertain the crowds like Frank Sinatra, Luciano Pavarotti, Liza Minelli, Maria Callas, Nana Mouskouri, and many more.

Today, this legendary open-air theater serves as the main venue for the events of the Athens Epidaurus Festival that takes place every year in the summertime, upholding the tradition of hosting extraordinary events at the glorious Odeon.

Visiting the Odeon of Herodes Atticus

The Odeon of Herodes Atticus is only open to the public on certain dates when the theater hosts a performance.

All the events are held from May to October when the Athens Epidaurus Festival takes place, bringing famous plays, ancient Greek tragedies, concerts, dance performances, and more to the famous stage. 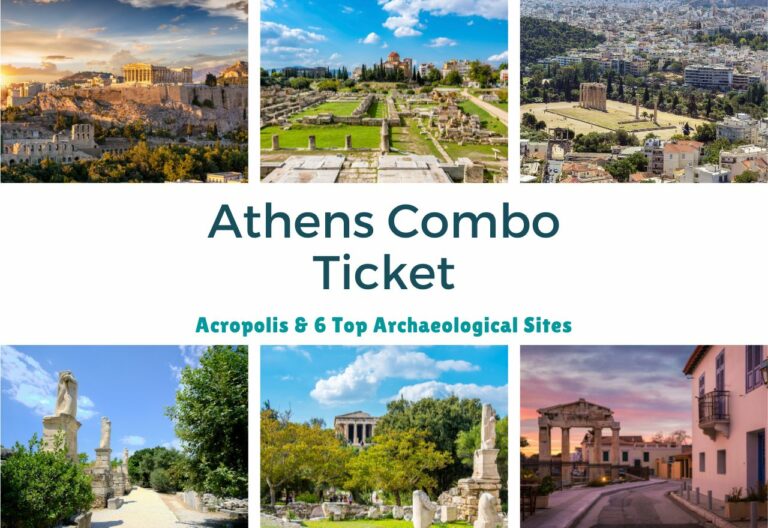 Visiting the Odeon of Herodes Atticus to enjoy any kind of performance is an experience that we highly recommend.

The open-air theater feeling combined with the venue’s marvelous acoustics will surely be the highlight of your trip. You can find the annual programme of the festival here.

Insider’s tip: In order to preserve the condition of the famous theater as best as possible, you can’t visit the Odeon of Herodes Atticus in heels!

So what if the dates of the events don’t fit your schedule?

Fortunately, there’s still a way to marvel at the sight of the famous landmark.

You can book an organized tour and combine a hassle-free visit to the Acropolis as well as a tour of the Odeon of Herodes Atticus with an expert guide.

Luckily for you, we’ve already gone through all available tours and scanned all itineraries to find some that combine the most spectacular highlights at an affordable price.

You can visit the Odeon for a performance, via a wooden ramp that leads to the lower A1 section of the theater.

There are 8 wheelchair spaces available in the A1 section, as well as 13 seats in the A2 section which can be reserved by visitors with mobility difficulties or other impairments.

Both wheelchair and non-wheelchair users are entitled to bring one companion with them.

In addition, there is a wheelchair-accessible toilet near the entrance of the Odeon. 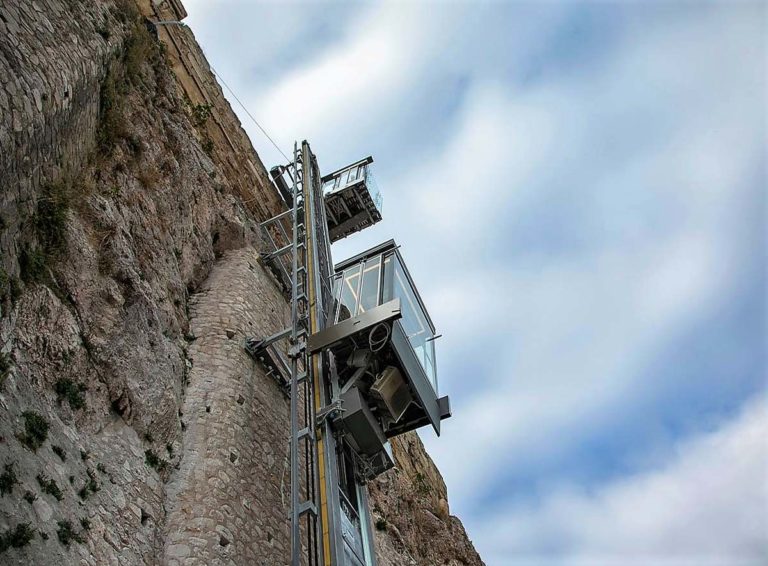 The History of the Odeon of Herodes Atticus

The Odeon of Herodes Atticus was built circa 161 AD by the famous Athenian benefactor called Herodes Atticus, after whom it got its name, in memory of his wife Aspasia Annia Regilla.

The impressive sloped theater was the third of its kind to be built in Athens. However, in contrast to the rest, it features an unmistakable Roman character.

Its three-story front wall and astonishing for their time wooden roof and arches, as well as its privileged location on the slopes of the Acropolis Hill, are what made it stand out and become one of the most renowned theaters of its era.

About a century after it was built, the theater suffered severe damage during the invasion of Heruli and was left in ruins for a long period of time spanning the duration of the Ottoman occupation.

A few restoration projects followed, at the turn of the 20th century to preserve the monument.

Later on, in the years of the German occupation, the Odeon was once again used to host performances, but it wasn’t until 1952 that the city decided to restore the theater to its former glory.

Since its grand reopening in 1955, the Odeon of Herodes Atticus has served as the primary venue for Athens Epidaurus Festival which still takes place every year until today. 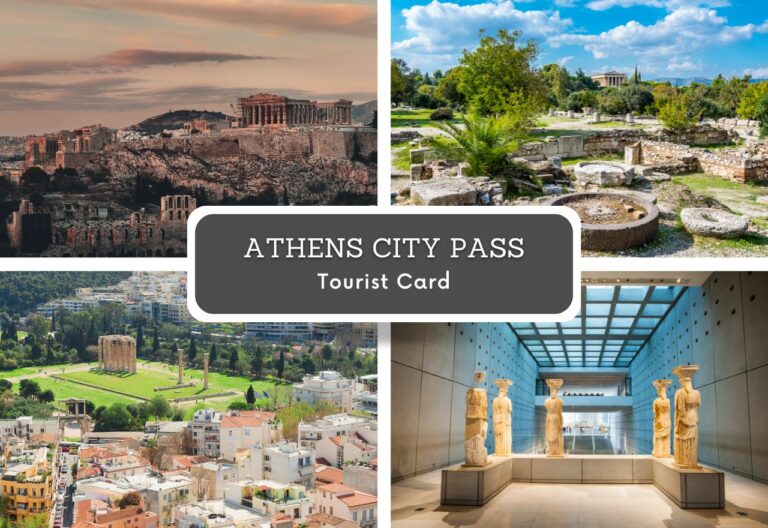 How to get to the Odeon of Herodes Atticus

“Herodeon” is located on the southern slope of Acropolis Hill, right in the heart of Athens, and it’s easily accessible from any place downtown.

Its entrance can be found on Dionysiou Areopagitou, the busy pedestrian street that runs from Thisseion all the way to the Acropolis Museum.

Here’s how you can reach the Odeon of Herodes Atticus:

All in all, visiting the Odeon of Herodes Atticus in Athens is an experience that you can’t miss. Especially those of you that will be lucky enough to visit during a live performance is guaranteed to go home with memories that will last a lifetime. 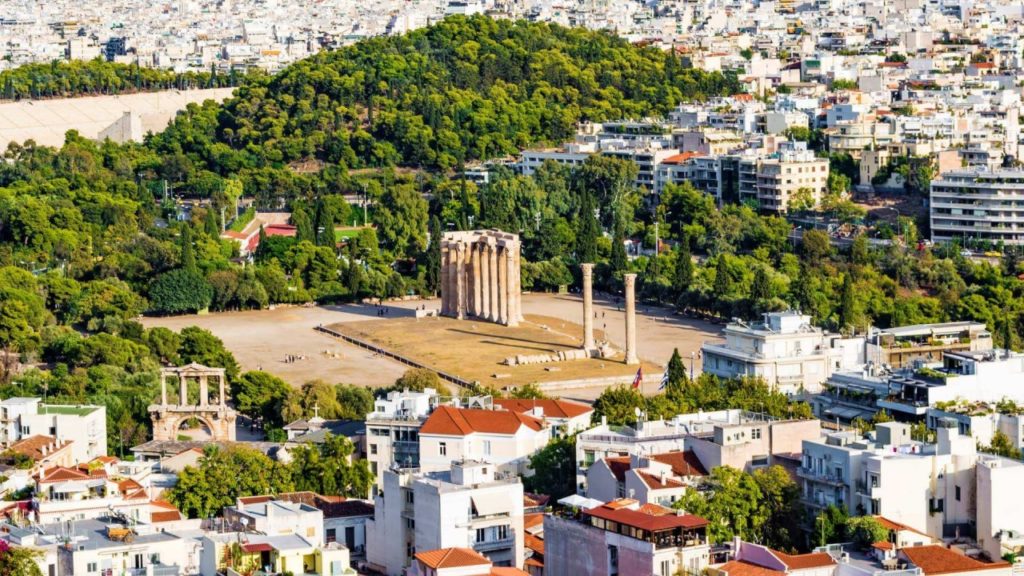 Temple of Olympian Zeus and Arch of Hadrian in Athens